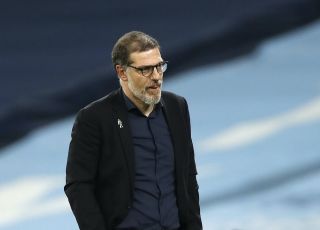 West Brom have sacked manager Slaven Bilic less than 24 hours after he led the promoted side to decent draw at Manchester City.

Having accepted the job at the Hawthorns last summer, the former Croatia and West Ham manager needed his first season at the Baggies with automatic promotion as runners-up in the Championship.

Bilic is sacked with West Brom positioned 19th in the Premier League standings.

“The Baggies are currently 19th in the Premier League table with seven points from 13 fixtures.

“Albion would like to thank Slaven and his coaching staff for their efforts in achieving promotion last season and wishes them all well in the future.
The club will make no further comment at this time.”

Sam Allardyce, who has been out of work since leaving Everton in 2018, has emerged as a top candidate for the job, as per Sky Sports.

It will be good having Big Sam back in the top flight and he’s probably the best man for the job, if they’re to avoid relegation and having to gain promotion again.

Ole Gunnar Solskjaer was asked about Bilic’s unfortunate news at his press conference this afternoon.

The Norwegian manager noted that it was sad to hear about the sacking.

“Well I think these times in a pandemic and what has happened has made everyone sit back and think, I’m very sad to hear Slaven has lost his job, done great getting them promotion, I’ve known him years, I’m sure he’ll be back soon,” Solskjaer told reporters, as per Manchester Evening News.

“Hopefully more and more clubs think long-term, it’s a long-term business, need short-term results but continuity is the key to success and patience.”

Solskjaer knows what sort of pressure Bilic was under at West Brom from his time in charge at Cardiff City.

“It’s not a nice position to be in as a manager, you want your players to be playing with confidence, thinking and believing,” he added. “With Cardiff, it was a new experience, a learning experience and a valuable one, I didn’t enjoy it with the results and relegation we got but as a manager you’re one of very few if you’re not gonna feel the pressure at one point.

“I felt it and Chris [Wilder], Slaven whoever feels that pressure are mentally strong enough because you have to be.”