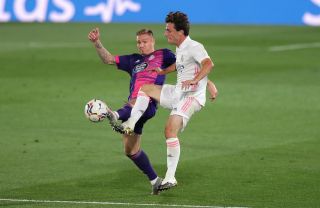 Manchester United are being linked with another right-back playing in La Liga.

According to the Manchester Evening News, United want to sign a right-back and named Atletico Madrid’s Kieran Trippier as a possible option.

Odrioziola impressed at former club Real Sociedad, who United have drawn in the last 32 of the Europa League, but he has not been able to make the step up for Los Blancos.

That doesn’t sound very encouraging but at 25-years-old this could be a player with bubbling potential. Either the scouts or Solskjaer wouldn’t consider him otherwise.

On top of that, I note that we need another right-back in the squad but this shouldn’t be seen as a way to take credit from Aaron Wan-Bissaka, who I rate very highly.

Perhaps having a more attack-minded right-back in the squad would make us a lot stronger, and it brings healthy competition to the table for Wan-Bissaka.