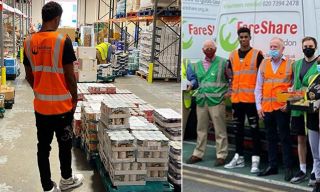 Manchester United have joined forces with FareShare to provide 80,000 meals to families from local communities this Christmas.

FareShare in Greater Manchester have donated 33 tonnes of food to the campaign so far. That amount will be turned into 80,000 meals by Manchester United club chefs, before being delivered to children and families from the Foundation’s partner schools, food banks and other charities.

United legend Denis Irwin, who visited Fare Share in Greater Manchester, said: “It’s an inspirational and incredible operation, one that is managed so well by FareSahre GM — full credit to them.

“The amount of families and children in need, people who need the most basic things, like food — it’s an eye opener.

“Manchester United is a huge football club, but we are committed to working in the community and the Foundation does a tremendous job. It’s a great effort on behalf of Manchester United and FareShare GM that we’ve partnered up so we can deliver these 80,000 parcels to partner schools and charities around Christmas.

“It can be a tough time for many people and unfortunately it’s only going to get tougher for some.”

United star Marcus Rashford is an ambassador for FareShare and through the charity he launched a campaign to end child food poverty in the UK. He was awarded an MBE for his work off the pitch — which also saw the Government make two U-turns on providing free school meals during holidays.