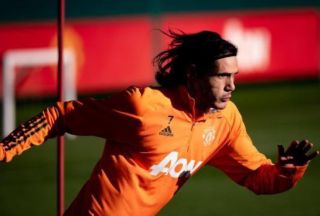 The 33-year-old picked up a knock during the win against West Ham, missing games against RB Leipzig and Man City, but it sounds like he will be in contention to face Sheffield United tomorrow night.

According to Manchester Evening News, the Uruguayan was spotted in training ahead of Thursday night’s Premier League clash.

Ole Gunnar Solskjaer is expected to give an update on Cavani during his press conference at 1:30pm today.

Cavani back in training today. #MUFC #UR pic.twitter.com/jxpSvPWcsw

Anthony Martial returned from injury last week so it looks like Solskjaer will have all of his attacking players available for the rest of the festive fixtures.

While that’s a boost for the manager, it’s also time for Martial to start scoring goals again. I have no doubts over Cavani doing that over the course of the season, but the Frenchman has been a concern of late.

Getting injured may knock his momentum further but it’s important for our chances this season to have a consistent goalscorer in the side. Bruno Fernandes is brilliant at pulling the strings and scoring penalties, but other players must stand up now we’ve a really good chance of challenging for the title season season.

Read more: Man United predicted line-up vs Sheffield United: Alex Telles could be key from on the left