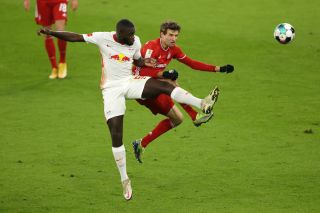 Dayot Upamecano wants to join a Premier League club, according to reports.

The RB Leipzig centre-back, 22, has been strongly linked with moves to Manchester United, Arsenal and Liverpool in recent months.

While Manchester United could really do with improving at the back, speculation grew on Merseyside following Virgil van Dijk’s long-term injury. Arsenal are just a lost hope at the moment.

Liverpool’s interest has been well-documented by the Liverpool Echo.

He tweeted: “The RB Leipzig player prefers the Premier League. No deal in the next transfer-window. Next summer the ball will start rolling for the defender.

“Both Manchester United and Arsenal in for him.”

The RB Leipzig player prefers the Premier League.
No deal in the next transfer-window.
Next summer the ball will start rolling for the defender

Both Manchester United and Arsenal in for him

Fjortoft doesn’t suggest Bayern Munich or Liverpool are in for Upamecano, which is interesting to leave out when he’s noting potential pursuits from United and Arsenal.

In September, the Frenchman opened the door to leaving Leipzig, saying (via Manchester Evening News): “For the moment I am with Leipzig but it is true that I was able to discuss with certain clubs.

“As I said, for now, I am focused on Leipzig and I will continue to play for Leipzig. And then we’ll see.

“You never know what can happen in a football season.”

Harry Maguire has been woeful this season and I don’t think we’re seeing the same centre-back Solskjaer signed from Leicester. I hope it’s just a rough patch and he gets back to his best soon.

It doesn’t help being partnered at the back by Victor Lindelof. I have long come to that conclusion and wanted Axel Tuanzebe to get more minutes on the pitch.