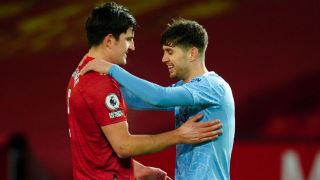 Rio Ferdinand is disappointed to have seen hugging takeover a once fierce battle with Manchester City.

After a scoreless draw in which the two rival clubs showed each other way too much respect, Harry Maguire was caught hugging City defender John Stones.

It showed that passion is defusing from what should be the most highly-charged of contests. If the players can’t show desire and determination to beat such a rival, should we have concerns about them long term?

Ferdinand rightly points out that “hugs all around” would not have been accepted during Sir Alex Ferguson’s iconic reign at Old Trafford.

“Boring Manchester derby,” Ferdinand told FIVE. “Normally there’s pushing and shoving, normally there’s some needle in the game, some goals. This was just a 0-0 borefest, and at the end hugs all around.

“I think it’s been well documented on social media. Listen, the new generation are different, we can’t expect them to be the same as the way we were. We weren’t hugging and kissing any Man City players or Liverpool players when we were playing because it was just a mad rivalry.

“Didn’t like them, didn’t like being at their stadium for longer than we needed to be, didn’t want to bump into any City fans during the week or after and the players, we were amicable. I get on with Joleon Lescott, Vinny Kompany among others, Joe Hart, Gareth Barry, all players who played for Man City at the time.

“But during the time we weren’t close and hugs wouldn’t have been part of what we were doing. A good shake of the hand, ‘how are you doing mate’ with a grimace. There was an undertone there because we were rivals, it’s as simple as that.

“I don’t understand, I don’t get the hugging really. It’s not something I’ve done, I would’ve been on at people for doing it. But I understand this generation are different.

“I’ll never forget, and this is what needs to happen. When I played for Man United, the first Manchester derby I played in was at Maine Road, the old Man City stadium.

“We got beat 3-1 I think, [Shaun] Goater scored a couple and they beat us. Coming into the changing room I could feel it, I could sense the atmosphere. Sat down, Ruud van Nistelrooy walks in with a Man City shirt. He’d swapped a shirt.

“Sir Alex Ferguson went off his head, he went nuts. He didn’t go red, he went purple. He went mad. He absolutely flipped, ‘don’t you ever come into a changing room after a derby with a shirt of theirs. Ever. Don’t bring one in this changing room’.

“From that moment I knew. I had the feeling before, but I was in no uncertain terms after I left the changing room that day that hugs and kisses, swapping shirts don’t happen in Man United vs Man City.

“That’s the way that I was shown at the beginning and that’s the way I continued. The question now is… is that the law being laid down now by the people that are there?

“Is there someone looking at a picture of the captain [Maguire] hugging one of their players? They might be mates, that’s fair, that’s fine, but is there someone in there saying, ‘listen, we don’t do that in here, what are you doing?’

“Who is that person telling him that? That’s the difference.”

Accepting new ways from a new generation is fine, but surely if Maguire sat down and listened to someone like Ferdinand he’d understand this is not an acceptable practice.

Maybe it would’ve been different had fans been at Old Trafford last week. Who knows?