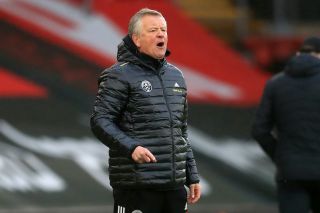 Manchester United will be looking at making a return to winning ways when they face Sheffield United in the Premier League at Bramall Lane on Thursday night.

The Reds go into the game on the back of a disappointing stalemate 0-0 draw with Manchester City at Old Trafford last Saturday, whilst the hosts were defeated 3-0 by Southampton at St Mary’s.

Edinson Cavani is widely expected to return to the squad having missed the last few games with a muscle injury whilst Anthony Martial is also expected to start for United having come off the bench during the Manchester derby last weekend.

It hasn’t been a good last week or so for Manchester United.

Exiting the Champions league combined with a lacklustre performance in the Manchester derby has really dampened the mood inside Old Trafford. You had hoped a corner had been turned after the Everton game which seen United go on a four-match winning streak but those hopes was soon dashed when United lost to RB Leipzig and with games coming quick and fast over the Christmas period its pivotal United get back to winning ways.

The Blades have endured a miserable start to the season and currently sit rock bottom of the Premier League table having only picked up a single point from their opening twelve games and in facing Sheffield United it presents United a fantastic opportunity to bounce back.

The hosts are have been leaking goals all season and its that defence which Solskjaer will undoubtedly look to exploit come Thursday and with Rashford, Martial, Fernandes and co all on board United should have more than enough to take all three points.

Beating Sheffield United won’t ease the pain of exiting the Champions League feel any easier but it will take United to within touching distance of leaders Tottenham Hotspur at the top of the Premier League table and given how inconsistent United have been this season it really is quite remarkable.