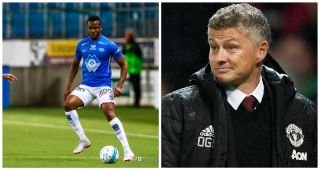 Molde were in the Europa League draw with Manchester United on Monday.

Molde striker Leke James has told GOAL the Norwegian club wanted to be drawn against United in the last 32 of the Europa League.

“Actually, we were expecting the bigger teams because they finished at the top.

“Majority of the players were expected United because of our former coach, Ole Gunnar Solskjaer, to have a reunion with him.

“We had a good time with him, he is a great guy and we had great personal experience. I would like to play under him again, hopefully in the future.”

James is 28 so he’s running out of time to get that dream move to Old Trafford. Maybe he will surprise a few in the remainder of the Europa League?

Read more: Back in the Europa League again