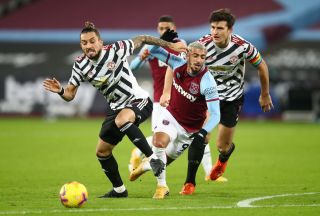 Manchester United take on Sheffield United on Thursday night in the Premier League.

The Reds go into the game on the back of a scoreless draw in the derby at home to Man City, and looking at the table right now, a win could see us turn a potentially exciting corner.

Sheffield United haven’t got Dean Henderson between the sticks and are really struggling at the back as a result. They’re leaking goals — worse than ourselves — so it’s a good opportunity for Edinson Cavani to come on from the bench and get back on the scoresheet. The Uruguayan has been out injured, missing recent games against RB Leipzig and City, both of which the Reds failed to win.

Ole Gunnar Solskjaer will be look to motivate his side into a Premier League title race this season. Getting knocked out of the Champions League was a bitter pill to swallow, but the league looks very open right now with Tottenham on top.

It bodes well looking back at four wins in five matches, with one of those being the draw against City.

However, this United side needs to learn how to start games on the front foot rather than chasing games and pulling off dramatic comeback wins.

Ahead of Thursday night’s clash, we have predicted how we think Solskjaer will line-up against the Blades.

Started the derby and kept a clean sheet, so I don’t see the Spaniard being dropped even if Dean Henderson will be looking to face his former team-mates. He’s not as good as he was before and it may be time to start considering Henderson’s long-term future in the side…

Best option we’ve got at right-back. I’m not letting one shocking performance against RB Leipzig change my judgement of a very good young player.

This is a good chance to give Tuanzebe some minutes on the pitch and there’s a lot of fixtures for us to be thinking about. I’d eventually like to see him become a starter.

As captain he’s expected to lead by example from the back. I expect better.

Sheffield United have been woeful at the back this season. I want to see United start on the front foot by getting balls down the left flank for Telles to send crosses in. He’s not the best defensively but Telles is a lot better than Luke Shaw in the final third, even if the English full-back’s corners are surprisingly decent.

Solskjaer has a player he trusts in McTominay.

The same as above. Most weeks these two are starting.

I miss Donny again and our build-play lacks precision when he’s not in the team.

Makes us tick, the Portuguese magnifico.

Fancy Rashy to run wild against the Blades.

Another one who needs a goal. Hasn’t been anywhere near prolific enough this season.

One response to “Man United predicted line-up vs Sheffield United: Alex Telles could be key from on the left”