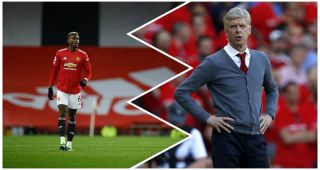 Former Arsenal manager Arsene Wenger believes that Manchester United should be handing the Paul Pogba situation better. An vague take from someone on the outside.

Pogba was in the headlines last week after his agent, Mino Raiola, revealed that the World Cup-winner does not have much of a future at Manchester United.

The news broke just 24 hours before United’s crucial Champions League match against RB Leipzig which we subsequently lost 3-2, only to crash out of the competition and into the Europa League.

Pogba was left out of the line-up against Leipzig and made a positive impact when he came on in the second half as a substitute.

Now, Wenger believes that Ole Gunnar Solskjaer’s man management of the 27-year-old should have been stronger.

“I believe that you have to explain to a player that no matter what his future plan is, his interest and his job is to perform at the present club,” Wenger told ESPN’s ‘Caught Offside’ podcast.

“It’s the best way to prepare your future, to play well in the present.

“When I saw Pogba coming on on Tuesday night at RB Leipzig, I was sorry he didn’t start the game because straight away he made a huge impact.”

I can accept Wenger’s view in theory but this is a manager who lost some of the best players Arsenal has seen after allowing them run down their contracts.

His best players left the club to win honours elsewhere, and a perfect example of that is Robin van Persie, who made the best decision to leave the Gunners for United in 2012.

Solskjaer could have gone stronger on Pogba by leaving him freeze in the Reserves.