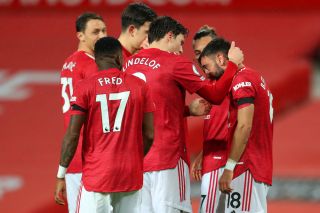 One of the biggest positives over the last 12 months was Bruno Fernandes’ arrival from Sporting Lisbon. The Portuguese playmaker has a “massive heart and immense quality,” according to Alex Telles, who has lauded his team-mate in a recent interview.

Fernandes has had an immediate impact on English football since completing a €55m move to United in January. Nobody thought 12 months on we’d be this happy with a new signing because many have flopped in recent years.

The 26-year-old was without doubt the driving force behind United’s third-place finish in the Premier League last season. In his first 22 appearances for the club, Fernandes scored 12 goals and he continues to be influential this term — contributing 11 goals and six assists in 18 matches across all competitions.

The Portugal International has won Premier League Player of the Month three times since moving to England, winning it again last week for November.

Telles, who signed for United on deadline day, played against Fernandes during his time at FC Porto. He says it’s a “pleasure” to now be playing alongside him.

“So, me and Bruno have known each other for a while now,” the Brazilian left-back told Inside United.

“Bruno has always stood out wherever he played and he is undoubtedly our main player here today.

“We were rivals on the pitch and today we’re team-mates playing in the same team. I’ve said to him that at the time he was quite annoying to play against on the pitch, always wanting to win, obviously.

“He’s a guy with a massive heart and immense quality, it’s there for everybody to see and I don’t need to talk any more about Bruno’s quality. It’s a pleasure to play with him.

“He is a great guy who is always willing to help everybody and he really makes a difference and that’s great.”

Telles was also asked to summarise Fernandes’ recent form, and said: “My summary is simple: decisive! He’s a decisive player.

“He may not stand out in one game or another, but he’s still decisive.

“When he’s in front of goal or from a free kick, or penalty, he’s always showing his quality. He’s got a strong mind and personality in his vision and thinking.

“It’s a source of pride and an honour to have someone like this in the team, someone that can help and motivate us in every game.”

Hopefully Fernandes can help us go on a winning run in the Premier League because we could do with climbing up the table.