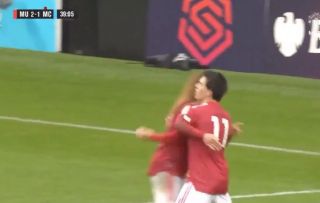 Facundo Pellistri impressed again for the U23s in the weekend’s Manchester derby.

The young Uruguayan has yet to make a first-team appearance but that won’t take long if he keeps up his performances for the youth team.

Signing on deadline day during the summer, Pellistri is one of two right wingers signed by Ole Gunnar Solskjaer. The other is Amad Diallo, who is not expected to join his new team-mates at Old Trafford until January (work permit permitting).

Fans will be encouraged after seeing him perform so well against City at youth level, and maybe the Europa League will offer a good chance to the winger to make his mark in the first-team.

The game ended 2-2 at Leigh Sports Village on Sunday afternoon.

Saturday’s clash at Old Trafford was a snore-fest but this game was not the same, as the ball had hit the back of the net twice within the opening 15 minutes.

City opened the scoring through James McAtee before Ethan Galbraith scored from the spot.

The blues found themselves down to 10 men after Adrian Bernabe’s hefty foul on Galbraith.

Sadly Pellistri’s goal wasn’t enough and City earned a point through Taylor Harwood-Bellis. As you can see below, he was in the right place at the right time.

Some nice work down the right-hand side before Facundo Pellistri puts United into the lead 💪 pic.twitter.com/TNp20XQYTl

It will be a huge jump into the first-team for Pellistri, but Solskjaer will take his time before throwing him into the deep end. Having Diallo available after the hectic festive period will also be a boost for the Red Devils.