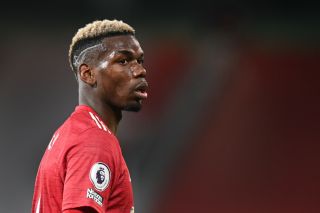 Mino Raiola has laughed off criticism over the timing of his announcement regarding Paul Pogba by saying people in England are ‘sensitive’ when it comes to discussing the Manchester United midfielder. All despite the fact one day before the team’s biggest game of the season, Raiola revealed that Pogba wanted to leave the club.

To summarise Pogba’s biggest problem right now, the World Cup-winner has continued to star for his country but those heroics are not being replicated at club level.

This has understandably led to criticism being aimed at the 27-year-old, who talks publicly about wanting to join Real Madrid (via The Guardian). If that wasn’t enough, his agent openly admitted last week that his client would be best to leave Old Trafford, as per Sky Sports.

I don’t feel sorry for Pogba for the criticism he gets because he does himself no favours, and has shown more disrespect towards the club than anything. You, as the reader, are more than welcome to disagree but right now I’d prefer if Solskjaer didn’t have this on his plate as well as sorting out the team.

For all of his ability, Pogba has not delivered. It is a transfer many of us will reflect on negatively due to the excitement his return brought along with Jose Mourinho’s appointment in 2016.

However, Raiola has ran his mouth again. Respect Italian football journalist Fabrizio Romano quoted Raiola on Twitter, saying: “Pogba will have a great future. In England, they’re very sensitive when you talk about Pogba… I’ve just expressed my thoughts. I’ve said that Paul can leave in the summer, it’s hard to do top deals in January.”

Mino Raiola: “Pogba will have a great future. In England, they're very sensitive when you talk about Pogba… I’ve just expressed my thoughts. I’ve said that Paul can leave in the summer, it’s hard to do top deals in January”. 🔴 #MUFC

Solskjaer must view him as a bad smell…

Meanwhile, Pogba is happy with Raiola openly discussing his future in this manner, so there’s little point arguing the player has yet to speak on the matter.

Especially when he has avoided proper interviews for the best part of three years.