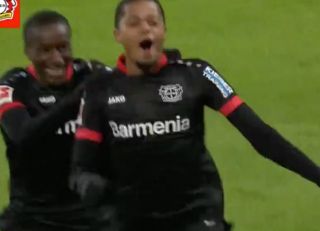 Bayer Leverkusen went top of the Bundesliga table after a 4-1 victory over Hoffenheim, while VfB Stuttgart thrashed Borussia Dortmund 5-1 and Bayern Munich recused a late draw at Union Berlin.

Manchester United target Leon Bailey bagged a brace with Florian Wirtz and Lucas Alario also on target as Leverkusen beat nine-man Hoffenheim to move into 1st for the first time since 2014.

According to the Daily Mail, Arsenal and United are actively scouting Bailey ahead of a potential move, and it’s no secret that the Red Devils are lacking on the right wing. It doesn’t help that on the same flank, Aaron Wan-Bissaka is not the greatest crosses but he usually makes up for it with his defensive duties.

That is another big reason United need to sign a talented right winger and they missed out on Jason Sancho last summer, as per The Sun.

Bailey scored twice yesterday and his first goal was a thing of beauty. It started as a short corner-kick, taken by Bailey, who picks the ball up again quickly before swerving the ball into the goal from a wide position.

Pictures for both goals courtesy of beIN Sports:

The second goal shows Bailey’s pace which is incredible, but it also includes one of the worst back passes you will see this season.

He won’t come be available on the cheap next summer.