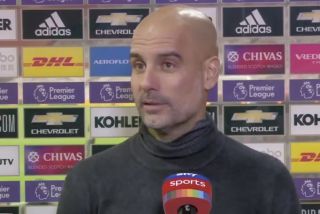 Manchester City manager has hailed arch-rivals Manchester United after the side’s 0-0 derby on Saturday. The Spanish tactician highlighted United’s physicality and speed as their key strengths after singling out Paul Pogba and Bruno Fernandes.

United hosted rivals City during Saturday’s tense Manchester derby, however, a 0-0 result signalled how dull and boring the usually exciting derby was.

Neither side looked like they really wanted to claim all three-points during Saturday afternoon’s game as each manager seemed content with just a point.

Speaking after the match at Old Trafford, Guardiola hailed United and admitted the Reds are a physically strong side who operate with speed.

City’s manager went on to single out midfield duo Pogba and Fernandes for their qualities.