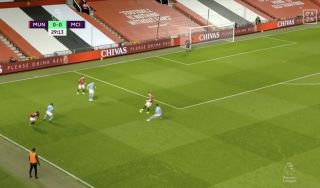 What a piece of play this was!

During the match’s first-half, the United backline and midfielders Bruno Fernandes and Scott McTominay teamed up superbly to navigate their way out from the back before unleashing what was almost a devastating attack.

Unfortunately, Fernandes fluffed his lines when they mattered most and failed to release a pass into Mason Greenwood, but make no mistake, if that through-ball had of found it’s way to the United teenager, fans were looking at a potential goal of the season.