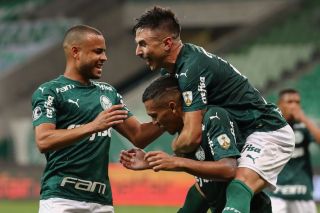 Veron, 18, who is a senior first-team regular has impressively climbed his way through Palmeiras’ youth ranks after joining the club’s under-17s side only last year.

The talented attacker who primarily operates as a right-sided winger has featured in 29 matches for his Serie A side and has been directly involved in 14 goals, in all competitions.

Since his impressive breakthrough into Brazil’s top-flight, Veron has unsurprisingly emerged as a transfer target for some of Europe’s biggest clubs with the likes of Arsenal, Juventus and United all casting a keen eye.

According to a recent written report from La Nazione (via Sports Witness), all three clubs are interested in the Brazilian wonderkid who is currently valued at around £22m.

The report claims that Arsenal’s recent successful South American recruitment of Gabriel Martinelli has prompted Mikel Arteta and Edu back into the Brazilian market.

Elsewhere, given the youngster’s exciting style of play, both United and Italian giants Juventus have also been drawn into the equation.

The Reds could very well be the club who have the edge when it comes to landing Veron though. The talented attacker currently shares the same agent as United’s in-form midfielder, Fred.

United have upped their youth recruitment over the last 12-months after bringing in some of the sport’s most highly-rated youngster, however, a potential move for Veron still remains unknown.