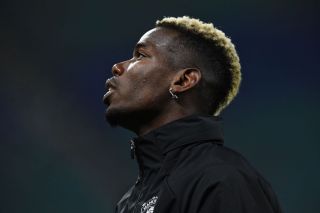 My eyebrows raised when I saw Paul Pogba in Manchester United’s starting line-up to face Man City this evening.

Paul Pogba’s future has never been in such doubt after his agent, Mino Raiola, made comments to Italian media about the midfielders wishes to leave Old Trafford.

Manager Ole Gunnar Solskjaer brought the Frenchman on during the week against RB Leipzig, and he responded by contributing a goal against the Bundesliga outfit.

While a number of fans won’t be changing their opinion 0f Pogba anytime soon, Solskjaer has decided to keep playing the World Cup-winner.

Pogba starts in a midfield that consists of Fred, Scott McTominay and Bruno Fernandes. There is very little width in Solskjaer’s side, with Mason Greenwood and Marcus Rashford tasked with leading the line.

Solskjaer was asked about his decision to start Pogba ahead of the match. His response has been quoted by BBC Sport journalist Shamoon Hafez:

Solskjaer on starting Paul Pogba: “There is no point talking off the pitch, you have to talk on the pitch as a footballer and that is where the proof is.

"You cannot stop good players from playing well. Paul has been focused on his football." #MUFC

That’s pretty fair from the manager, who I think accepts Pogba will be leaving the club.

It appears as though he’s still trying to get the most out of Pogba — seemingly leaving it up to the player to get the transfer he desires.

That’s great if it works. It’s embarrassing if it doesn’t.