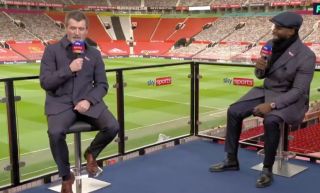 Roy Keane may be good value to have as part of a punditry panel, but when it comes to management a lot is left to be desired.

The former Manchester United captain announced that he doesn’t like footballers who smile during an exchange with Micah Richards.

Richards, who played under Keane when he was Martin O’Neill’s assistant at Aston Villa, was previewing West Brom’s clash against Newcastle in the Premier League.

After positively referencing players who always have a smile on their face, Keane cut across and Richards acted as though he expected a side comment from the Irishman.

🗣"I always love players playing with a smile" 😁

🗣"I never like players who smile, you are there to win remember, not for me" 🤣

As you can see from the footage below they’re at Old Trafford for this evening’s Manchester derby, kicking off at 5:30pm.

Keane is great value on Sky Sports as a pundit and Richards makes a good partner in crime.

However, when it comes to true analysis of the game, I think there are far superior at providing insight. Take ex-United player Danny Higginbotham as a perfect example, and he’s currently covering the Premier League over in America.