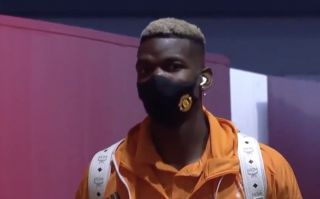 Manchester United midfielder, Paul Pogba, is one of the first to arrive at Old Trafford ahead of his side’s mouth-watering Premier League clash against rivals Manchester City.

The two halves of Manchester are set to collide at 5.30pm (UK time) later on Saturday afternoon in a game that could have serious implications on which side mount a serious title challenge.

United will be desperately looking to bounce back from their crushing 3-2 defeat against RB Leipzig earlier this week.

Ahead of Saturday’s match which is set to be played out at Old Trafford, United midfielder Pogba has been spotted on his way to his team’s dressing room.