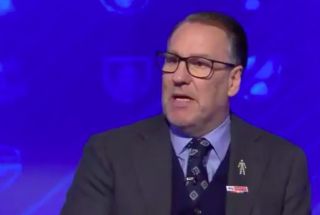 Solskjaer has come under fire for his negative team selection after United crashed out with a 3-2 defeat at the Red Bull Arena.

The United boss effectively fielded seven defensive outfield players in a five-at-the-back system that backfired within 13 minutes as the Reds fell 2-0 behind.

A double defensive midfield pivot of Nemanja Matic and Scott McTominay was deluged by Leipzig’s intense press and the pair were powerless in protecting the shaky back five.

Pogba dominated much of the talk pre-match after Mino Raiola’s awfully timed comments regarding his future and it was unsurprising to see the Frenchman drop to the bench.

Merson believes Pogba must have had prior knowledge of Raiola’s admission and believes the super-agent should be sacked if he didn’t.

The case for van de Beek’s inclusion, however, was far more compelling as United simply lacked enough creative output on the pitch to compete.

Solskjaer should ditch his five back formation for this evening’s crucial Manchester derby at Old Trafford.

The Reds can go four points clear of Pep Guardiola’s men in the Premier League table with victory.

Listen to Merson’s thoughts on Pogba and the RB Leipzig defeat below, via Sky Sports: