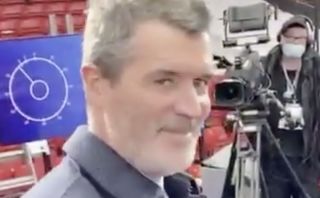 The most unlikeliest of duos in football is fast becoming one of the best.

Sky Sports’ pairing, Micah Richards and Roy Keane have been in great spirits ahead of Saturday’s exciting Manchester derby.

Both former players who famously turned out for either side of Manchester now work together on Sky Sports covering the sport’s action.

However, in what, on paper should be a broadcasting partnership that shouldn’t work – Most definitely does.

The pair, who have been jesting ahead of Saturday’s 5.30pm (UK time) kick-off between United and City were spotted hilariously winding each other.

Despite the light-hearted humour, Richards definitely knows which one of Keane’s buttons to press.