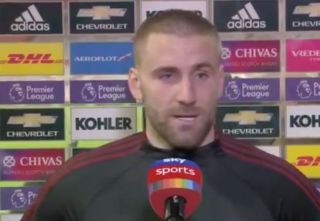 Luke Shaw gave an interview to Sky Sports after the Manchester derby.

The Manchester United left-back expressed his belief that it was a tight encounter.

Either team could have took it at the end but both sides will take the point and move on after canceling one another out for 90 minutes at Old Trafford.

Shaw still wants this side to improve if they are to have any chance challenging for the Premier League title.

“We know we need to improve to be fighting at the top,” Shaw said.

Pictures below courtesy of Sky Sports

Luke Shaw believes the 0-0 draw in the Manchester Derby was a fair result pic.twitter.com/yZWrjKO0LB

The focus now is on Thursday when we travel to Sheffield United in the league.