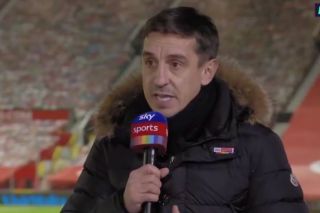 Micah Richards really stuck his nose in the wrong place this evening on Sky Sports.

In an attempt to make Paul Pogba out to he a scapegoat, Richards sounded like someone who really doesn’t know the score at Old Trafford.

The former City full-back was put in his place by Gary Neville, who went on to make it very clear that Pogba wants to leave Manchester United and his agent, Mino Raiola, is trying to engineer a move for his client.

Richards bangs on about Pogba needing to be loved, but the fact of the matter is he would have received that had he performed better and showed more determination on the pitch.

Watch the full discussion below courtesy of Sky Sports:

🗣"Can we just stand still here on Paul Pogba, he does not want to play for Manchester United"

This should force United not to do business with Raiola again — even if that means ruling ourselves out of any future race to sign Borussia Dortmund’s Erling Haaland.