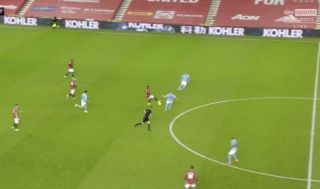 Manchester United’s Fred has enjoyed a great first-half in the Manchester derby with his latest moment of brilliance coming against midfield duo Kevin De Bruyne and Rodri.

Fred, 27, is enjoying arguably his best form since his arrival in Manchester two-years ago.

A brilliant start to the new 2020-21 season has seen the Brazilian feature in 14 matches in all competitions and although the South American has yet to score a goal, his important midfield work is not going unnoticed.

In an attempt to bounce back from a recent red card in the Champions League, Ole Gunnar Solskjaer’s number-17 is not letting his manager down in Saturday’s Manchester derby.

Fred has shone in the midfield which has been best showcased by his recent skill against De Bruyne and Rodri.