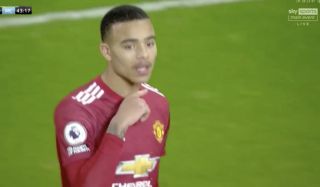 Manchester United midfielder Bruno Fernandes was spotted telling youngster and team-mate Mason Greenwood to keep his chin up during the Reds’ clash against Manchester City on Saturday.

Fernandes, 26, who joined the Reds back in January has spent just shy of a year showcasing not only his technical ability, but also his classy leadership qualities.

The Portuguese midfielder is arguably one the Reds’ most vocal members of the squad and visibly leaves everything out on the pitch, every time he pulls on a United shirt.

One moment which went relatively under the radar during Saturday’s match was the 26-year-old’s support of young forward Greenwood.

After missing a decent chance during the Manchester derby’s first-half, Fernandes was the first one to remind the teenager to keep his chin up and to keep going.