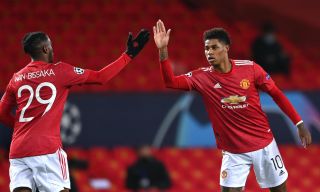 Believe… because what else can we do?

On the back of comments made by Ole Gunnar Solskjaer suggesting Manchester United can challenge for the Premier League title this season, Marcus Rashford has labeled the Reds one of the “most dangerous teams in the league”.

The England international says he’s still hopeful United can make the campaign a successful one despite their inconsistent start to the 2020-21 season.

I would say unpredictable is a better description for this United side than inconsistent, which they clearly are too. We’ve suffered damaging defeats against Crystal Palace, Tottenham and Arsenal in the Premier League, and today face a task against our rivals Man City.

Truthfully speaking, I just don’t know which United side will show up this evening…

Three back-to-back defeats in the Champions League saw us exit the competition on Tuesday. That undoubtedly puts extra pressure on Solskjaer this weekend to deliver.

United are currently 7th in the league with a game in hand on all six teams above them. A draw today wouldn’t be the worst result, but it would be a real bonus to get three points on the board after the week we’ve had to endure, from Paul Pogba’s agent running his mouth to crashing out of the Champions League.

Speaking to MUTV ahead of the derby, Rashford stresses that he still believes in the squad after the Champions League knockout blow: “I think it’s still, with how the league has been going, way too early to be looking at the table really.

“I don’t even know where we were three games ago compared to where we are now and all it takes is a couple of wins and teams can be up and down.

“We’ll take it one game at a time to try to pick up points and see where we are a bit later on in the season. But I believe in the team, in the manager and the staff, so, hopefully, we can still do something special this season.”

Rashford isn’t stupid either, he acknowledges the fact that results haven’t been good enough in recent months.

“I would put us up there in the top three or four most dangerous teams in the league. For us, it’s just about finding that consistent level of performance really,” Rashford added.

“Sometimes, there have been times we’ve not played well and won games and, if you’re going to do something special in the league this year, we need to do that a lot more. You know you’re not going to play at your best every single game but it doesn’t mean you lose or draw the game. There is always a way to win the game and we have to find that more.

“Listen – we are a young team, we’re fresh, we’re strong and, yeah, there’s no reason… United always finish strongly. I feel that’s one thing Ole brought with him when he came to United, just that understanding, knowing the club, knowing what it is and what it stands for. Never giving up is right at the top of that list and we’ve shown it on countless occasions. We have to continue to do that.”