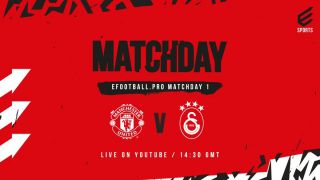 The eFootball.Pro tournament begins on 12 December as part of KONAMI’s eFootball.League that welcomes competitors of all skill levels.

The series is divided into two separate events: eFootball.Pro, the elite competition for professional football clubs, and eFootball.Open, the amateur tournament open to all players.

United play in eFootball.Pro, which is a 3v3 tournament, and it will be played online because of COVID-19.

United have a sponsorship deal with KONAMI as opposed to EA Sports, who make FIFA games.

“This is a tournament you might not be used to as it’s not 1v1 but, with 3v3, it’s more exciting,” O’Neill explained via Manchester United’s official website.

“In esports and football games in general, there are not many co-op games. Most of the co-op games are shooter games. It’s nice to see a team of three controlling 11 players because you have to coach one another to make sure one doesn’t create a gap or make a mistake.

“One little mistake can cost you everything, so communication is very important and trusting each other. I think people should watch it because of this.”

This won’t appeal to every Manchester United supporter, but I’m sure there will be more fans gaming this Christmas with the launch of new consoles. You can’t knock something until you try it.

eFootball.Pro attracted over 15 million total views on YouTube last season, and it looks like something that is always growing. It includes clubs like United, Barcelona, Bayern Munich and Juventus.

The first game for United is against Galatasaray on Saturday, December 12. Coverage begins on MUTV at 12:00 and our match kicks off at 14:30.