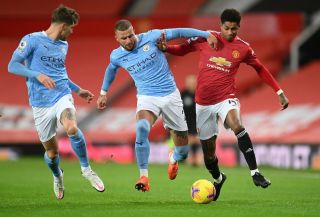 Improved from the Leipzig debacle but ineffective on rare occasion he passed City’s half. 5

Casual as United lacked tempo in possession throughout. Defended stoutly, however, and ultimately justified his inclusion. 5

Marshalled an organised defence well despite some shaky moments. Solid response after a miserable night on the continent. 6

Dealt with threat of Mahrez and Ferran Torres brilliantly on return to left-back. Dangerous corners caused problems for City before the break and United’s best defender. 7

Took a heavy knock from Kevin de Bruyne early on but recovered to reiterate his importance in a midfield pivot. 6

Could have given United the lead but Victor Lindelof’s flick-on evaded him. Protected the back four shrewdly but lacked ambition in possession. 5

United’s most likely man in attack. Given freedom to come inside and influence play from unconventional left-wing position but could not provide decisive moment. 6

Often indispensable but impotent as he was seldom found in useful positions and wilted towards the end. 4

Struggled to make an impact from right-flank as United lacked ambition. Substituted for Anthony Martial on 73 minutes. 4

Eager to make a difference but offered little to no service and tired late on. 4