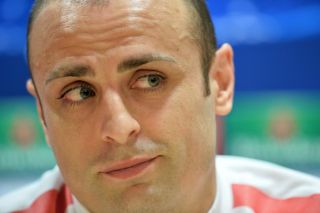 Former Manchester United striker, Dimitar Berbatov, has given a worrying prediciton ahead of his old side’s Premier League match against arch-rivals Manchester City on Saturday.

During his hugely successful time in Manchester, Berbatov was a regular figure in the Reds’ tense and fierce Manchester derbies.

Whilst playing, the prolific forward featured in 14 battles of Manchester across all competitions and came away on the winning side on 10 different occasions.

However, despite the Bulgarian having fond memories of lining-up against the blue half of Manchester, Berbatov isn’t feeling as confident ahead of this current United side’s clash on Saturday evening.

United do come into Saturday’s exciting derby boasting the better head-to-head form after winning three out of the last four encounters in all competitions.

However, after a recent 3-2 defeat to RB Leipzig saw Ole Gunnar Solskjaer’s Reds crash out of the Champions League at the group stage, the Red Devils will certainly still be hurting.

Ahead of Saturday’s tense clash, Berbatov has given his thoughts as to how he expects the 90-minutes to pan out.

“Oh my god!” Berbatov told Metro. “Coming from the last match, if United play anything like they did in the first half when they take on City, I don’t see anything good coming for them in this one.

“If they correct themselves and they don’t let two goals in and wake up to start playing, they should be fine.

“Solskjaer has an impressive record recently and he’s had the better of Pep. In this one though, coming off the back of the result midweek, I think it will be difficult.