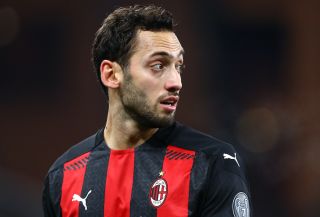 This rumour just will not die.

Manchester United have reportedly held ‘several conversations’ for AC Milan midfielder Hakan Calhanoglu but the Turkish attacker is expected to cost between £18.3m and £22.9m if a January move is to be secured.

Calhanolgu, 26, first joined AC Milan from Bayer Leverkusen in 2017 in a transfer which cost the Serie A side £20.97m, as per Transfermarkt.

Since his arrival in Italy, the talented set-piece specialist has featured in 145 matches and has been directly involved in 68 goals, in all competitions.

According to reports which have been circulating for quite some time, the 26-year-old, whose contract expires next summer, could be set for a shock move to Old Trafford.

A recent report in the ongoing saga came earlier this month from Sky Germany (via Sports Witness), who claimed that United’s hierarchy have had talks with AC Milan over a possible transfer for Calhanoglu.

However, Pianeta Milan report that despite United’s attempts, AC Milan remain firm in their demands to secure between £18.3m and £22.9m for their star midfielder.

Pianeta Milan’s report also claims that despite AC Milan’s recent attempts to get Calhanoglu to sign a new deal, the two parties are struggling to reach an agreement.

It has also been reported that alongside United are Juventus and Paris-Saint Germain who are also keen on signing the 26-year-old in January, however, Pianeta Milan speculate that Calhanoglu is more likely to leave next summer for free.

The outlet claim that AC Milan have already started lining-up a replacement for their Turkish playmaker with the Serie A giants shortlisting Real Madrid’s Isco as an ideal candidate.

Worth noting – We reported earlier this month that United have absolutely no interest in landing Calhanoglu, which we still understand to be the case.