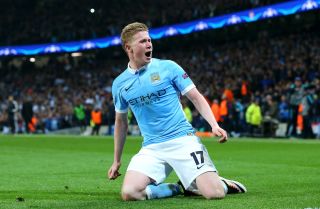 Fernandes, 26, joined United in January from Sporting Lisbon for a fee of £49.5m, as per Transfermarkt.

Since his arrival in England, Fernandes has had a monumental impact on his side’s on-field fortunes.

After featuring in 39 games, the 26-year-old has already managed to be directly involved in a whopping 37 goals, in all competitions.

Ahead of the two side’s mouth-watering Manchester derby clash on Saturday afternoon, City’s world-class midfielder, who has been speaking to Sky Sports has singled out United’s Fernandes.

“He’s a wonderful player,” De Bruyne admitted, as quoted by Metro. “He came in and he gave United a different momentum.

“They were struggling last year, I know they had some games where they won against good teams but consistency wasn’t there last year for them.

“That’s much improved this year and Fernandes is a big reason for that. He’s a guy who makes football look fun. We’re pretty similar in a way but I don’t compare myself to other players.

“I enjoy other players but I never compare.”

Ole Gunnar Solskjaer will lead his side into the first Manchester derby of the season off the back of a crushing 3-2 defeat to RB Leipzig earlier this week; a result which sent the Reds crashing out of the Champions League at the group stage.

However, the Norwegian will be taking some confidence from the fact the Red Devils hold the better recent head-to-head record over their noisy neighbours, after winning three of their last four meetings, in all competitions.

Today’s match has the potential to have some serious title challenge implications as both sides of Manchester are separated by just a single point in the Premier League table.