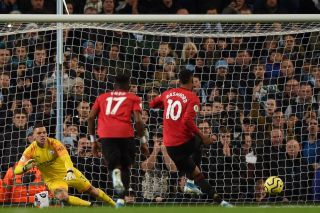 Manchester City goalkeeper Ederson has been speaking to the press ahead of today’s Manchester Derby.

Usually, we wouldn’t cover interviews done by City players, but this time Ederson actually says something noteworthy about Marcus Rashford.

Speaking to Pilhado ahead of the derby, Emerson revealed how Chelsea’s David Luiz and arch-rival Rashford have two of the most unique and clinical shots in the Premier League.

“There are some guys who shoot really well,” Ederson said, as quoted by Sport Witness. “United’s Rashford shoots very well.

“David Luiz’s free-kicks, that upturn, with the Carabao Cup ball still, the ball makes about eight turns, goes up, down, it looks like a turbulent plane, that ball is too bad.”

Since joining City from Benfica three years ago, Emerson has gone to be become one of the best goalkeepers in England.

Ederson has managed an incredible 77 clean sheets in 159 matches, and he will be looking to make it one more against Ole Gunnar Solskjaer’s Reds.

Meanwhile, former Old Trafford favourite Louis Saha says Rashford is lacking the ruthless attitude in the final third required to be a top striker, as per GOAL.

The England International has scored 77 goals in his first 232 appearances for United, while also providing 45 assists, and doing his best to help off the pitch too.

He scored 22 goals last season in what was his most prolific season yet, and Solskjaer will be looking to see him replicate that this term.