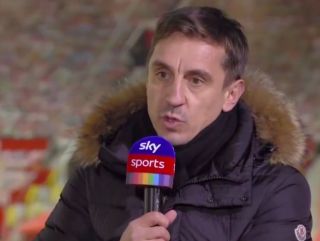 Gary Neville accused Manchester United and Manchester City of lacking intent to win one of the worst derbies in the modern era.

Ole Gunnar Solskjaer and Pep Guardiola showed no ambition to secure three points with their tactics and substitutions, settling for a dire draw with few chances at either end.

United can take positives from nullifying City’s threat after their defensive debacle in the Champions League in midweek.

But Solskjaer’s side had a real chance to profit on a disheveled City showing and were void of enthusiasm in a game of such magnitude.

United remain one point ahead of their rivals in the league table and City’s efforts were particularly underwhelming.

Neville was frustrated with City at full-time for not living up to their lofty standards.

The United great suggested the away side looked ‘bored’ at Old Trafford, despite needing a victory to overtake Solskjaer’s men in the league.

Listen to Neville’s post-match thoughts below, via Sky Sports:

🗣"If Jose Mourinho was the manager of either of those teams we would be killing them now" @GNev2 on the very defensive display in the Manchester Derby pic.twitter.com/h7s7Psc1h3