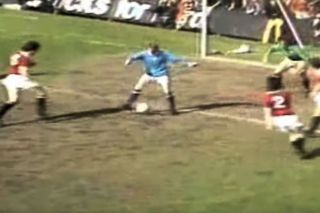 Denis Law is one of a few to have played for both Manchester clubs.

The King of the Stretford End has admitted one of the most talked about goals in Manchester derby history was “a fluke” – almost 50 years after his back-heel hit the back of the net.

Law scored hundreds of goals throughout his career — and yet he’s most remembered for one that didn’t really matter.

Scotland’s joint-leading scorer won a European Cup and Ballon d’Or award, but instead people bang on about the myth that his back-heeled winner for City at Old Trafford in April 1974 regulated United, ending our 36-year stay in the top flight.

It’s a myth because the goal was completely inconsequential as United were going down anyway. Law scored in the 81st minute and at the time a draw wasn’t enough for the Reds, and neither was a win!

Results elsewhere meant United were going down regardless of Law’s goal. A completely meaningless goal in the grand scheme of things.

Law has spoken exclusively to the Mirror about the goal, even though they’ve completely ignored the fact this goal was not the reason behind United being regelated that season when publishing the final copy.

“Well it was! I mean, a back-hell? How do you do a back-heel when you’re there? It wasn’t very nice, but that’s the game, isn’t it?

“It was my last kick of a ball in professional football. Isn’t that strange? That was it, a back-heel.”