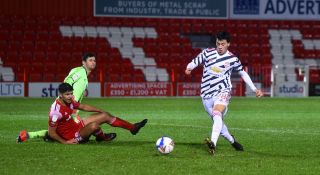 While Manchester United has shown signs of inconsistency this season, at least the summer signings are making good progress. While Donny, Cavani and Telles have played with the first team, Pellistri has featured with the Reserves so he could adapt to this new adventure. He is turning out to be of great help for the U23’s and is also making a good impression to his coaches.

The 18-year-old Uruguayan was signed from Peñarol in the summer and we expected a few minutes for him with the first team, but Ole is trying to deal with his development in a slow, but yet safe way. What he can possibly offer to our first team and how has he been playing recently? You are about to discover shortly.

United U23’s have been a delight to watch this season as they marked their return in the Premier League 2 Division 1. In terms of results, Neil Wood’s side have had their ups and downs, but the level of performance is satisfying. The first team manager has some prospects he is probably keeping an eye on and Pellistri despite only signing this summer for United, has given the gaffer a lot to think about.

Pellistri made his United U23’s debut against Everton U23’s in a thrilling 2-1 win, showing glimpses of his talent. The Uruguayan made some great moves around the box, but certainly his effective crossing was a major highlight in the game as his cross in the 25th minute found Shola Shoretire who had his shot saved. The following minutes showed that Facundo moving around to find the right spaces, giving United fans hope that finally a decent right winger is at the door. Despite not scoring, the impression he left was a great one leaving the attacking midfielder hungry for more. While being a bit shy in the first half of football he played with United, Pellistri was more lively in the second half, being more direct. Certainly his presence in the air helped winning United a couple of battles and few free kicks.

He then featured for the U21’s in the EFL Trophy. Having secured qualification for the next round there wasn’t much to play for and United U21’s ended the group phase in a defeat of 4-0 by Morecambe FC. Pellistri played the entire match with not much to do and I should note that he received a lesson on tracking down the opponent, a lesson which will serve him with the first team as well.

His return with the U23’s was marked in the 4-2 victory against Tottenham in a brilliant way. The Reserves had been creating various chances since the start of the game, but unable to break deadlock with both Elanga and Shoretire trying earlier. However, as Mejbri recovered the ball, a pass to Fernandez followed who found Arnau Puigmal in the middle. The Spaniard spotted Pellistri down the right wing and the moment he got the ball, Pellistri first made a little run while taking on Cirkin who couldn’t prevent Pellistri’s brilliant cross (you can watch the goal here) which found Shoretire who scored with his head.

Pellistri also started against West Ham U23’s, a problematic game for the Reserves as they just didn’t seem to find a way to scored and a few mistakes costed them the game. Pellistri had a good game overall, but unable to provide for Elanga and the United attacking line. The referee was out of the line with several decisions and it was a game to forget overall.

It was only in the game against Southampton that Pellistri finally expressed himself fully. After a brilliant first half, it was Shoretire’s time to return the favour. In an excellent play in the middle, Shoretire’s pass found Pellistri who made no mistake in front of the keeper. The Uruguayan was also impressive in the rest of the half, unlucky to score another.

On Tuesday night, Pellistri was named in the U21’s starting XI that took on Accrington Stanley. The U21’s conceded early in the game. As United were looking for an equalizer, Woolston’s long ball in the attempt to clear the area found the opposition unprepared. Elanga was brought down while trying to control the ball. Then, Pellistri beautifully took the keeper and defender out of play and scored, going 1-1 at half time. However, United couldn’t keep a 2-1 advantage (goal scored by Elanga) and are out of the Papa Johns Trophy (formerly known as EFL Trophy).

Well, despite only being a few games there are several things I have noted in the player. He is versatile, playing from both wings. His explosion from the right truly can make you wonder whether he is the answer to our right-wing problems and creativity – dependence on Bruno Fernandes. While the first team may have been requiring such qualities, it is important the player is not rushed into the first team for the sake of justifying the fee United paid to sign him. This would hurt both the club and player as well.

There is no coincidence in all these decisions United are making about his development and on the other hand the player has come around as a humble person, willing to work hard and also patient on waiting for his chance to shine. His work ethic and talent will help him go far in football, no doubt. As for his United career, the signs are promising and United fans should look forward to watching him play for the first team. A right winger? It has been a while, right?