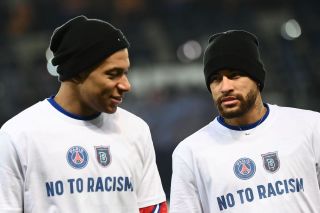 Duncan Castles drops transfer news on his fittingly titled The Transfer Window podcast regularly and the latest update on Kylian Mbappe will be of interest to Manchester United fans.

The understanding right now is Mbappe is keen on joining Liverpool but is also believed to have told friends of his admiration for United ahead of the transfer window.

Speculation is rife that Mbappe could leave Le Parc des Princes next summer, with his current contract at Paris Saint-Germain set to end in 2022. He would be a bonus to any side but I can’t help but feel we will struggle to interest a player like Mbappe without Champions League football.

Real Madrid have been regarded as favourites to sign the World Cup-winner, as is the case whenever there’s a star on the cusp of greatness.

Mbappe’s tally is already 12 for the season and his goals could go a long way at Old Trafford.

The France star’s future was discussed by Duncan Castles on The Transfer Window podcast, as quoted by The Express.

“The clubs he is particularly interested in moving to, Real Madrid, Barcelona, who both have financial issues, Liverpool, and also he’s told friends that he likes Manchester United,” he said.

“Liverpool, we know how their finances are at present. We know the efforts FSG have made to improve their finances by laying off and using government schemes, we know that there’s a battle going on at the moment between Klopp and FSG about recruiting a new centre-back.”

It would take a lot of money to sign him next summer. A lot more than what Jadon Sancho would’ve cost and we baulked at that last summer.