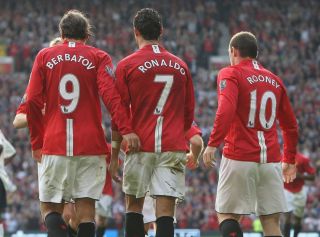 There is no shortage of professionalism when it comes to Cristiano Ronaldo. Since his early days at Manchester United he has always worked to be the best and he will now go on to retire as one of football’s best ever players.

Former Manchester United teammate, Dimitar Berbatov, has added a story of Ronaldo’s professional from his own memories of just how dedicated the Portuguese star was during his time at Old Trafford.

“I’ve been a lucky guy to share a season [with Ronaldo],” Berbatov told Diario AS.

“Training with him was like a war because I didn’t think about anything other than winning everything, including the little games we played. Cristiano was a good kid who increase the competitive atmosphere in the team.

“At the Christmas parties we organised the players had a great time, but he was always very professional. I never saw him even take a drink. He took extreme care of himself.

“You’d come to training and he’d already be in the gym. Then, he’d stay for extra work after training to work on his finishing, before going swimming and then returning the gym.

“He was determined to be the best.”

Since leaving Manchester United for Real Madrid in 2009, Ronaldo went on to even greater success and became a better player. He’s currently playing for Juventus, with speculation building over another transfer next summer.

The question now is whether the 35-year-old can beat all odds and play until he’s 40 at the highest level.

Unlike United, Ronaldo’s Juventus qualified for the knockout stages of the UEFA Champions League during the week. The Italians topped Group G with Barcelona finishing runners-up.

Things are not going as well for Juve in Serie A with the champions positioned 4th in the standings. AC Milan, who have United right-back Diogo Dalot on loan, are on top of the league — five points clear of rivals Inter Milan.