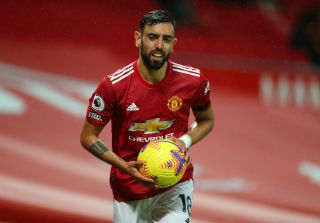 Bruno Fernandes has been named Premier League Player of the Month for November after scoring four goals and providing one assist.

He did that in four games to win his third Premier League Player of the Month award since joining Manchester United in January. Fernandes’ won the award previously in February and June.

The Portugal international has had a massive influence on the team in his short time at the club, after becoming the player who makes us tick most.

According to the Telegraph, Paul Pogba is unhappy that Fernandes is playing in his preferred midfield role, but the Frenchman has done nothing to warrant getting the nod over his teammate. The report adds that Pogba will leave the club at the end of the season.

Fernandes scored a brave in the 3-1 win at Everton on November 7, as well as the winner in a 1-0 victory over West Brom on the 21st. He ended the month with another goal in a 3-2 comeback win at Southampton.

Introducing your @EASPORTSFIFA Player of the Month for November…

These results helped United climb back up the table and Fernandes will be hoping they can replicate that form in December, with the Manchester derby on Saturday.

Now we are out of the Champions League it’s important to add consistency to our league form.

Finishing third or higher in the table is a real possibility. Who knows where a winning run over December will see us positioned in the table for the New Year?

Ole Gunnar Solskjaer needs to keep his players focused on the big prize.