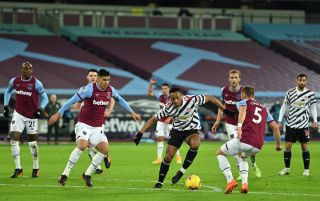 Ole Gunnar Solskjaer is addressing the media at Carrington this afternoon.

The Norwegian has confirmed that Anthony Martial will return for the Manchester derby, but a late decision will be made on Edinson Cavani, who has clearly yet to fully recover from the knock he picked up against Southampton last weekend.

OGS confirms Anthony Martial will return for @ManUtd tomorrow. Decision still to be made re Cavani.

There is some good news in a week that has been coated in negativity after United crashed out of the Champions League on Tuesday night.

The focus needs to be on this game, the Manchester derby, and it’s one of the best fixtures you can ask for when the players are trying to bounce back.

Martial needs to get into a bit of goalscoring form because that will benefit the entire side. That way we will win more games and continue to climb up the Premier League title.

We’ve got good players, who can create magic from nothing, and Martial is one we haven’t seen at his best this season.

Hopefully that changes starting on Saturday against Man City.