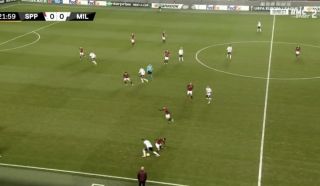 Manchester United’s Diogo Dalot, who is currently on-loan with AC Milan, has played an important part in his temporary side taking the lead against Sparta Prague in Thursday’s Europa League group game.

Dalot, 21, joined AC Milan on a season-long loan during the summer after failing to break his way into Ole Gunnar Solskjaer’s first-team plans.

In an attempt to continue his development, the attacking Portuguese full-back has enjoyed a very decent start to life in Italy.

Having featured in a total of seven matches in all competitions for AC Milan already, Dalot currently boasts three direct goal involvements with his latest coming on Thursday evening.

Whilst in action, in the Europa League, deployed as a left-back, Dalot went on a teasing run before playing team-mate Jens Petter Hauge in who took care of the rest.