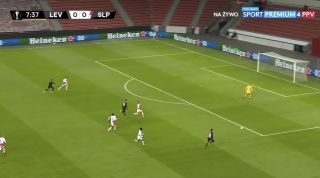 Bailey, 23, joined Bayer Leverkusen in 2017 from Belgian side Genk in a deal that cost the Bundesliga side just £12.15m, as per Transfermarkt.

Since his arrival in Germany, the talented attacker has featured in 130 matches and, prior to Thursday evening, had been directly involved in 50 goals in all competitions.

However, after being named in his side’s starting line-up for their Europa League match against Slavia Praha, Bailey has produced the goods once again.

After already netting three times and assisting a further two times during this season’s Europa League campaign, Bailey is more than impressing one of the sport’s biggest stages.

According a recent report from the Daily Mail, alongside Arsenal and Everton, United also sent scouts to keep a close eye on the Jamaican attacker during Thursday evening’s match.

Bailey has not disappointed those casting a keen eye on him after opening the scoring after just eight-minutes.