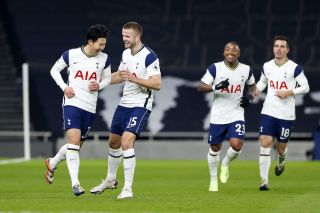 Son, 28, joined Tottenham Hotspur in 2015 from Bundesliga side Bayer Leverkusen in a deal that cost Daniel Levy just £27m, as per Transfermarkt.

Since his arrival in the country’s capital, the South Korean attacker has emerged as one of the league’s most prolific strikers.

Having featured in 246 matches, Son boasts a remarkable goal involvement record after scoring 98 goals and assisting a further 53 in all competitions.

The 28-year-old’s most recent goal heroics came after a wonder strike gifted his side the lead in the notoriously fierce North London Derby last weekend.

In light of Son’s impressive five-year long spell with Tottenham Hotspur, one admirer of the exciting attacker is United legend, Ferdinand.

Speaking on the former defender’s own YouTube channel ‘FIVE‘, Ferdinand was recently asked if he thinks Son is the best Asian ever to grace the illustrious Premier League.

‘Is Son the best Asian player to come to the Premier League?,” Ferdinand said, as quoted by London Football. “Listen, I played with more of a player’s player, an absolute top player, top professional in Park Ji-sung.

“Park Ji-sung, you wanted him in your team. I remember he man-marked [Andrea] Pirlo out of a game once. Pirlo was waking up in the middle of the night and Ji was at the bottom of the bed waiting for him, giving him nightmares.

“But Son, man. If there was a player that I could take now [at Manchester United] that I feel would get the ball, he would be up there as one of my first picks, definitely in my top three.

“I love the way he plays, he is direct, he hurts teams, wants to score all the time, can go off both feet and he looks like a fantastic lad as well, so who is the best Asian player to play in the Premier League?”

Would you like to see Son turn out for United? – Let us know in the comments.