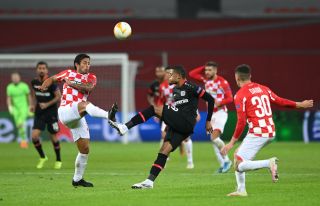 Manchester United have reportedly instructed members of their recruitment team to scout Bayer Leverkusen’s Leon Bailey when the attacker takes-on Slavia Praha in the Europa League on Thursday.

Bailey, 23, joined Bayer Leverkusen from Belgian side Genk  in 2017 in a deal that cost the Bundesliga side £12.15m, as per Transfermarkt.

Since his arrival in Germany over three-years ago, the exciting attacker has featured in 130 matches and has been directly involved in 50 goals in all competitions.

The talented wide-man, who primarily operates as a right-sided winger but can successfully fill in anywhere across a team’s front-line, has emerged as a transfer target for Ole Gunnar Solskjaer.

United have been in the market for an out and out right-sided attacker since Solskjaer’s arrival back in 2018, however, having failed to land number-one target Jadon Sancho earlier this year, the Reds could now be forced to sound out alternatives.

According to a recent report from the Daily Mail, one of those strong alternative candidates is Bayer Leverkusen’s Bailey.

The Daily Mail claim that United are instructing their scouts to monitor the Jamaican winger when he faces-off against Slavia Praha in the Europa League later on Thursday evening.

However, due to strict COVID-19 guidelines, club scouts are unlikely to be able to attend the game in person and will therefore be forced to use specialist scouting systems to cast a keen eye over the attacker.

The Daily Mail also claim that it is not just United who remain keen on Bailey, as the Jamacian is also attracting strong interest from the likes of Arsenal, Tottenham Hotspur and Everton.