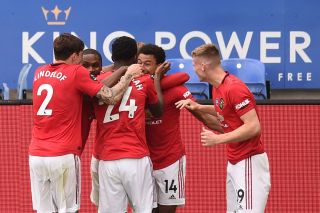 Midfielder Jesse Lingard is reportedly set to snub a contract offer from Manchester United as the player and his agent, Mino Raiola, are busy plotting a move away from Old Trafford.

Lingard, 27, has spent his entire career with United after joining their youth academy all the way back in 2000.

A series of successful loan spells with the likes of Birmingham City and Leicester City eventually led to the midfielder’s first-team inclusion in 2016.

Arguably Lingard’s most influential moment came during the 2017 FA Cup’s final. Lingard bagged the game’s winner in extra-time against Crystal Palace to ensure the illustrious trophy would return to Manchester.

However, in more recent times, Englishman has found himself fall savagely out-of-favour under current manager Ole Gunnar Solskjaer where is now forced to play nothing more than an emergency back-up role.

According to a recent report from Corriere dello Sport, Lingard could be one of the next big names to depart Old Trafford.

CDS’ report claims that the player is set to refuse a contract renewal offer with a January move looking increasingly more likely.

It is understood that Lingard’s super-agent, Raiola, has already touted his client’s services to the likes of Inter and AC Milan as well as La Liga title contenders Real Sociedad.

CDS also claim that a six-month loan is a real possibility before the midfielder departs on a permanent deal when his contract expires.