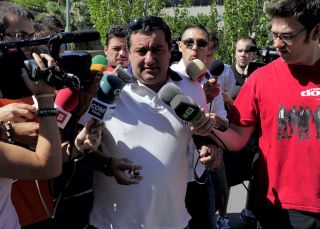 Manchester United midfielder Paul Pogba looks all but set to finally move on from Old Trafford in January as the window transfer window creeps closer to opening. After his super-agent, Mino Raiola, unleashed a public admission that his star client’s time at United ‘was over’ earlier this week, the Reds’ hierarchy now appear to have finally lost all patience. However, the list of potential suitors for the World Cup winner is not very long and with Raiola struggling in his working relationship with Real Madrid, Serie A side Juventus now appear firm favourites to take Pogba off United’s hands.

Pogba, 27, rejoined United in 2016 from Juventus in a world-famous deal that cost the Reds’ hierarchy a whopping £94.5m, as per Transfermarkt.

However, having failed to string together a succession of eye-opening performances, the French midfielder has always struggled to cement his place among the club’s most influential players.

A series of public statements from both the player himself and his representative have seen large selections of fans call for his exit; a sentiment which is now reportedly echoed among the club’s senior officials, as per The Sun.

However, as we reported earlier this week, despite the club wanting to wash their hands of their World Cup midfielder, the list of potential suitors is not long which has forced Raiola to pitch his client to Europe’s biggest clubs.

It has been well-documented over the last 12-months that Pogba is keen on a move to Real Madrid. In addition to Los Blancos, Juventus have always been a possible destination given the Frenchman’s previous impressive four-year spell with them.

However, according to a recent report from Italian outlet Calciomercato, it is the Old Lady who sit red-hot favourites to land Pogba after Raiola and Madrid president Florentino Pérez do not have a good working relationship.

The report claims that Zinedine Zidane tried to land Pogba 12-months ago but United’s transfer demands in addition to Perez and Raiola’s poor relationship prevented a move from happening.