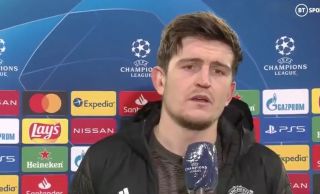 Captain Harry Maguire admitted Manchester United must do better after they crashed out of the Champions League on Tuesday night.

Ole Gunnar Solskjaer’s side suffered their third defeat in the group stages, losing 3-2 to RB Leipzig to finish third in Group H.

Maguire told BT Sport after the match: “This club deserves to be in the competition.

“We have to get through the group. We knew, no matter what group it was, it was going to be tough but we have to do more.

“We looked at the group and felt we should get through — those are the standards of the club.

“I’m the captain, I’m disappointed, I’m gutted for everyone because we worked so hard to reach this competition.

“I don’t want to look at excuses. There are 11 bodies who have to go out there and be aggressive, win the first balls, win the second balls and defend crosses.

Despite two late goals, United bow out of the #UCL.#MUFC

“It’s the basics of football. It doesn’t matter what shape you are in. If you can’t defend crosses, you are going to lose football matches.”

Pictures below courtesy of BT Sport

"We've got to look at ourselves."

"You can't defend crosses, you're going to lose matches."

Angelino, on loan from Man City, got Julian Nagelsmann’s side off to a dream start with a goal inside two minutes, with Amadou Haidara adding a second shortly after.

The scoreline could have reflected worse on United had Leipzig took all their chances.

Read more: Solskjaer gets it wrong as Man United crash out of Champions League against RB Leipzig