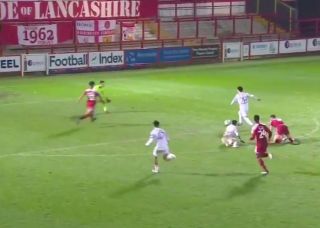 Facundo Pellistri scored for Manchester United’s development side on the same night Ole Gunnar Solskjaer’s side crashed out of the Champions League.

The Reds were defeated 3-2 on a decisive night in Leipzig and Neil Wood’s young Reds lost by the same scoreline in a brave effort away to League One side Accrington Stanley in the Papa John’s trophy.

United had progressed through to the competitions knockout stages after coming through a group that included Class of 92 co-owned Salford City.

But they ultimately fell up short despite the bests efforts of the likes of Hannibal Mejbri and Pellistri against Accrington’s first-team.

Pellistri, a summer deadline day signing from Uruguayan outfit Penarol, scored his first goal for the Reds against Southampton in the Premier League 2 last weekend.

And his first strike against senior opposition in England came in the first-half against Accrington, as he capitalised on some poor defending and showed composure to sit the goalkeeper down before slotting home.

Solskjaer will be aware of the progress Pellistri is making at youth level and we feel it will only be a matter of time before the teenager makes his first-team bout.

See Pellistri’s goal for the U21’s below. Footage via iFollow:

3 responses to “Video: Facundo Pellistri scores second Man Utd goal that most fans will have missed”