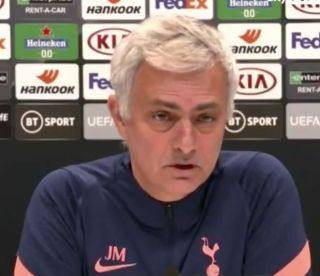 Tottenham manager Jose Mourinho says Manchester United have a great chance of winning the Europa League after being knocked out of the Champions League in the group stages.

The Red Devils have finished third in Group H, despite winning their first three fixtures. The problem was they lost their final three fixtures, finishing on nine points.

United suffered a 3-2 defeat away at RB Leipzig on Tuesday night which ensured that they missed out on qualification for the Champions League knockout stages. Their only chance of European success this season hangs on the Europa League now — a competition they reached the semi-finals in last season before losing to Sevilla.

Our disappointment from last night doesn’t help that Ole Gunnar Solskjaer’s side only needed a point at Red Bull Arena to progress from Group H, and then to concede so early from an Angelino strike was the worst start possible. Amadou Haidara and Justin Kluivert scored the other two goals to give Leipzig a crucial win.

A late Bruno Fernandes penalty and an own goal from Ibrahima Konate gave the Reds hope of a dramatic comeback, but you don’t often get away with giving away three goal leads, especially in Europe’s most prestigious competition.

In hindsight, it’s a shame to say we didn’t give it our best shot to qualify. The defeat away to Istanbul Basaksehir derailed our European season and I don’t really want to think too much about the Europa League right now.

However, former United manager Mourinho thinks the Reds must automatically be considered as one of the frontrunners to lift the Europa League trophy after dropping out of the Champions League.

“Manchester United become one of the top favourites to win the competition,” the Portuguese manager said during a press conference on Wednesday, as per GOAL.

“The teams that drop from the Champions League are strong and normally don’t belong to the level of the Europa League.

“United are one of the top teams. The group was very hard with Paris Saint-Germain and Leipzig. We knew it was not going to be easy for any of them.”

Watch footage from the press conference below via Sky Sports

🗣️ "Now Man Utd are one of the favourites for the #UEL"

Jose Mourinho is not thrilled to have Manchester United join Spurs in the Europa League knockout stages pic.twitter.com/XZqDWgoQRl

Hmm… part of me thinks Mourinho enjoyed making these comments at United’s expense. And to put pressure on Solskjaer too, of course.

Mourinho, who is in charge of Europa League bound Tottenham, won the second-tier competition with the Reds three years ago, and has just guided his side to the round of 32 this time around. United can’t face Spurs in the next round but it’s a possible match-up for the latter stages of the competition should both teams progress.

Tottenham can secure top spot in Group J if they beat Antwerp on Thursday night.