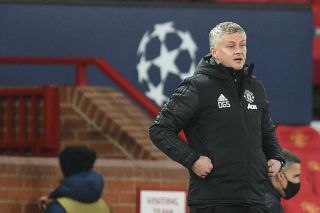 United crashed out of Europe’s elite competition at the group stages after failing to secure the one point from two games they needed to qualify.

And pressure is growing on Solskjaer who will ultimately take much of the responsibility for this season’s failures in Europe.

But The Guardian report that the club belief progress is being made under Solskjaer and they remain fully behind their Norwegian manager ahead of a defining Christmas period.

Despite disappointment in Europe, the Reds are on a run of nine consecutive away wins in the league and are five points from Tottenham at the summit with a game in hand.

The Guardian notes that there is a belief within the club that Solskjaer can help the Reds mount a serious title charge this year which has been proven through his rebuilding of the squad and impressive win ratio.

Solskjaer’s win ratio as United manager is 58%, marginally superior to rivals such as Mikel Arteta at Arsenal and Frank Lampard at Chelsea.

It is added that Solskjaer is seen to be moulding a strong squad at Old Trafford through a blend of supreme talents like Mason Greenwood and established stars such as Bruno Fernandes.

Of course, United cannot be unequivocal in their backing of their manager as a dramatic dip in form over winter could derail the season.

But, for now, Solskjaer is the man to lead United and the club appear optimistic that he can lead an improbable challenge for the 21st league title.